I think I found another secret telepad I never found before. It's on mission 2 on the second level of the mines, shortly after Torch contacts you about a large Di-Cor deposit to the north and a safer route on a conveyor. Of course I took the northern route. I could hear a telepad. I couldn't find an opening though. Using the hackmover I uncovered the padd at the location I expected it to be. Doing more moving I found hidden shootable switches. Hitting those a few times opened the telepad. It takes you to a recharge room with a health station, energy recharger and a box with some goodies (including energy cubes and a datapick).

The switches are behind the lower wall and not visible.

Staff member
I love when stuff like this is uncovered. I believe that particular room is the one they encourage the player to not enter, so maybe that's why it took this long to find!

Torch STRONGLY urges you to take the conveyor belt since that room on the screenshot is filled with Di-Cor. It's also not listed in the strategy guide.

But I'm cheating right now, I just want to play through it again at a quick pace while uncovering as much as I can (that means taking both shortcuts and the long way in levels where there are short cuts). I didn't think I would find stuff I've missed in the last 15/20 years.

When trying to find secret telepads it helps turning off the music (as bad ass as it is) because you can hear them. If you can't find them even though you hear them, hack mover can you help locate them and perhaps even the switches necessary for them.

In all honesty, I should have found it before because I took the northern route more often (most of times I take both routes because I want to destroy and kill as much as possible) but that one must have eluded me. I probably didn't want to spend too much time in a Di-Cor polluted environment.

I'm replaying the game again and again try to find all the secrets and stuff. I ran into this one, again. I couldn't remember how to open the door and was about to post here when it turns out I had figured it again. Posting it again here for posterity. I revealed the hidden switches with the hack mover. They can be activated by hugging the wall. I don't know what the exact procedure is, but this one worked consistently for: first I active 1, 2, 3 in that order. Then I deactivate them again in the same order. Then I activate 1 and 2 and it opens (and I think just touching 2 is already enough). This mission was filled with switches and keycards out of sight actually. At the start of this particular level there is actually a huge short cut if you trigger a hidden switch at the SE end of the entrance room. It will eventually bring you to a conveyor belt that will take you to a secret area in the last level, I don't think you can access that area coming in through the telepad. In it you also find a keycard to open the blast door which you normally have to open through a terminal since the keycard isn't found.

What irks me is that the strategy guide, which aims to tell you every trick and stuff, has missed this. In fact they specifically tell you this part of the level is a dead end, don't go there. Also, I never figured out the passcode for the blast door at the end of the corridor. The door opens if you manage to get up to the room the Vetron spawns in, but there was never any passcode revealed.

Staff member
Thanks for the eight-year followup!

So I guess this is the corridor with the switches: 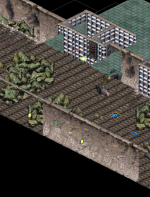 The teleporter is hinted at in the strategy guide since that does stick out on the map.

and this is the secret room (that is indeed not in the strategy guide): 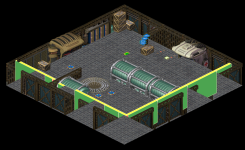 Yes that is the corridor and room. Where did you get the maps? They sound like an interesting source to see if there's things I've missed in the last 25 years as even the strategy guide doesn't show everything in their maps.
C

I wrote a few small programs that read the Crusader source files directly and render the output. Haven't been able to upload the full size images yet because they are a few tens of megabytes of PNG and most hosting sites refuse them; also they are usually 16000*16000 pixels in size. Keenan was trying to run the code; I've put all of it at github.com/dascandy/cnr - should be fairly straightforward to compile, only uses standard C++ stuff, although you'll need to use C++17 or 20.
You must log in or register to reply here.
Share:
Facebook Twitter Reddit Pinterest Tumblr WhatsApp Email Share Link
Top