No Remorse No Remorse: Mission 9 bug? Or is it just me?

Been a while since my last visit here and looks like my previous account is lost, since it's associated to a longer functioning email address...

Anyway, I've been playing again the Crusader games lately and I'm trying to locate as many secret areas I can. While playing Mission 9 on No Remorse (the one where you have to spy on Draygan videoconferencing with his senators) I found myself stuck due to an apparently non-working teleporter pad: when the Silencer steps on the platform he simply reappears at the very same platform and the message "No destination for this egg!" is printed on the screen. As far as I can tell, you are then stuck with no way out. Is this a bug? Or is it me having this problem because I'm visiting that very spot on the level after spying the meeting when I'm supposed to visit before the meeting?

If you wish to replicate this, go to the area shown in the first screenshot below, jump on the desk, then on the green computer thingy and then jump over the ledge (be careful about Elite troopers with grenades once you have jumped):

This area is clearly meant to be visited, since there is a locker to open with some medkits and energy cells stored inside (see the next screenshot): 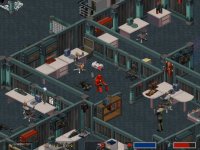 And here is my attempt to use the teleporter pad. As you can see in the screenshot below, once the Silencer re-materializes at the pad the message "No destination for this egg!" is printed on the screen: 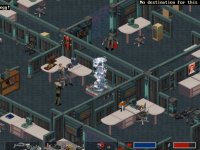 BTW, this happened while playing No Remorse v1.21 from GoG, rather than using my copy of the original CD-ROM game.

P.S. I didn't shoot those civilians! Blame the WEC troopers! 😅

This is a really nice find. I remember coming across something similar, but unfortunately can't remember in which level.

However, I believe, even if it is not necessarily a bug, that this procedure was not intended this way.

If I find time, I'll check it out personally.

0x04 said:
This is a really nice find. I remember coming across something similar, but unfortunately can't remember in which level.

However, I believe, even if it is not necessarily a bug, that this procedure was not intended this way.

If I find time, I'll check it out personally.
Click to expand...

Cool! Please let me know what your findings if you get the time to replicate this issue at your own end.

If I find the time myself, I'll restart mission 9 (the closest savegame I've got is at the end of mission 7) and see whether the above problem with the teleporter happens also when visiting the area before listening in on Draygan's meeting.

Staff member
Pretty sure I've encountered this as well. It's been a long time, though. I think it's a generic error for teleporters without a destination associated to it.

Man, I love Mission 9. I think it's the best of the game. Wish Origin released a level editor for Crusader, because I would've made a dozen levels with the tileset of Mission 9.

That's interesting to know. Once I have the time, I'm going to check if the teleporter does not work also before eavesdropping on Draygan's meeting or whether it stops working only after.

And yeah, I totally share your wish Origin released a Crusader level editor. I spent so many hours creating custom Doom levels back in the day and I'm sure that if it was possible to create new levels for Crusader I would have been into that too!

For anyone interested: the teleporter will not work even if used before spying on Draygan's meeting, i.e. the "No destination for this egg!" message is the only effect of using the teleporter. Which means the Silencer is stuck in that place if you manage to access that area, unless there is some fancy jumping I missed to get back to the main area.
You must log in or register to reply here.
Share:
Facebook Twitter Reddit Pinterest Tumblr WhatsApp Email Share Link
Top