is the universe of crusader the one from other games?

Hello folks, i just registered here. I played both crusader games back in the 90tees

The reason i read some post here on this board is that iam interested in the idea that the crusader universe could be the same as the ones of other games. The games Iam talking about are system shock and terra nova. I was thinking about that since some information can be found in terra nova about the resistance fighting an economic power on earth in the past and as far as i remember even in crusader something is said about the AI that the plot of systemshock is about. In terra nova, the AI also is mentioned in the history data.

ok, btw: nice to see an active crusader board in the net after such a long time since the release of this game.

I can see what you're saying. In several Origin franchises, there are references to games from other Origin series'. For example, the fiction in Wing Commander: Secret Ops references the WEC several times very clearly.

It harkens back to a time when sections of Earth were strip-mined to exhaustion in order to fuel the military/corporate alliances that almost destroyed the developing nations at the fringes of a developed first world (Need I mention the W.E.C.).
Click to expand...

At a public gathering on the third settlement of Zeta Orionis Prime he stated, \"This is par for the course for the TC. Not since the W.E.C. have we seen such destructive policy played out on the populace. If the next fifty years go the direction the last fifty years have gone we could be heading for another civil war that could make the W.E.C. dissolution look like a Sunday in the park.\"
Click to expand...

Look at this image: 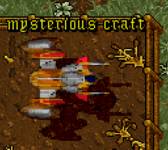 ​
This is from Ultima VII... That's a ship from Wing Commander.

You're right about the AI reference in Crusader -- in the No Remorse Topline Newsletter, there is a reference to something called SHODAN... this is the AI from System Shock. You can see the image here: